After a period of increasing tensions several minor border skirmishes have occurred in the last two weeks. The incidents have led to a build-up of forces on both sides of the Syria-Lebanon border. During the early hours this morning Syrian forces have launched a military incursion into east Lebanon.

Syrian airborne forces have landed in the Rayak airfield area and enemy transport helicopters are currently bringing in reinforcements from the east. The airfield and nearby structures are considered high risk due to enemy manpads. Lebanese border troops are stalling enemy advancements along two attack routes, but they are outgunned and in need of air support. Furthermore incoming enemy artillery is threatening the routes of Lebanese ground reinforcements. The direction of the incoming fire is known but the assessed location of the artillery is currently approximate.

Further taskings may be added

Enemy armor elements are expected to be accompanied by AAA and possibly short range IR SAMs. Manpads expected in and around Rayak airfield. SA-5 and SA-8 are expected at military bases near Damascus. 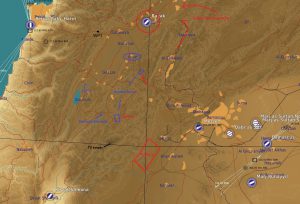