The Abchazian war has been raging for several months with no end in sight. Stiff Abchazian resistance backed up by Russian air power has turned the Georgian offensive into it’s breakaway province into a stalemate.

Russia, hoping to divide the Georgian resources, will launch a secondary offensive along the Terek river, down the Georgian Military Road, the sole remaining border crossing between Georgia proper and Russia.

Georgia, lacking any substantial ground forces in the area, will have to rely on their limited air assets to stop russians.

Package mission:
1. Atredi departs from forward base and localises the hostile forces.
2. Kori & Akula departs from FOB north of Tblisi and proceeds north to Pasanuri village. Akula continues north and links up with Atredi and assists with scouting and direction for strike aircraft.
3. Artsivi departs from Tblisi and attacks russian forces with cluster munitions to degrade air defences.
5. Once all aircraft attacks are done, Kori & Akula starts attacking convoy with guided missiles, and if deemed safe, unguided rockets and cannon. Atredi, armed only with door-mounted heavy MGs, is only to attack if all hostile air defences have been taken out and if there’s soft targets left.

Intel:
Note that due to the lack of AWACS and mountainous terrain making GCI difficult, pilots will have to rely on their Mk1. Eyeball and aircraft sensors for much of the scouting and target acquisition.

The following photograph was taken by a Georgian border post guard at 09:50 LT, immediately after the russians crossed the border. 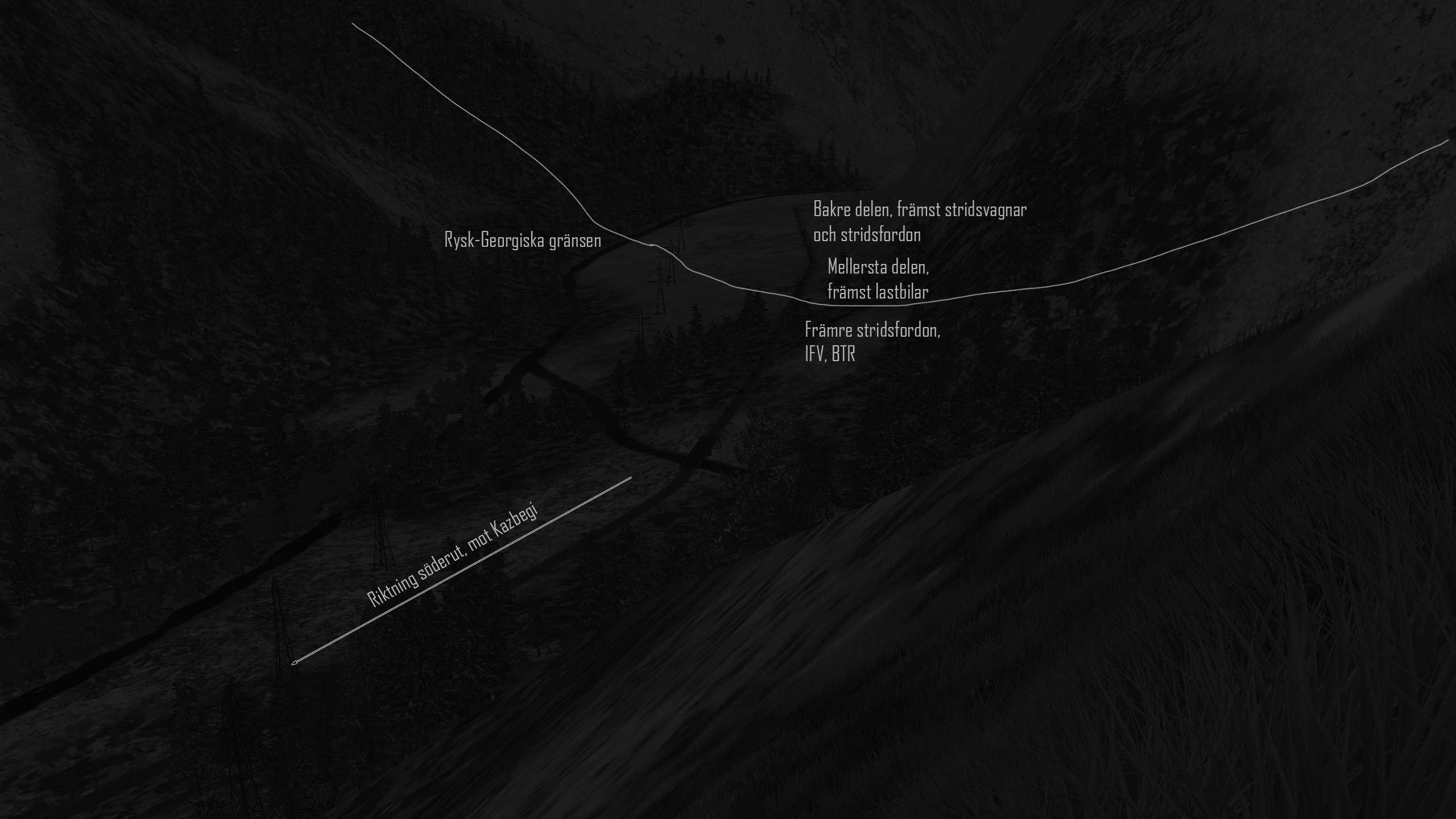 AKULA2- Depart from FOB Misaktsieli and proceed north into the valley. Join up with ATREDI and assume scouting & direction duties. Guide RODINA and ARTSIVI in their attacks on the enemy forces. Engage remaining targets once the aircraft have performed their attacks. Direct KORI so that they are in position to join once you commence your attacks as well.

KORI2 – Depart from FOB Misaktsieli and proceed north into the valley. Hold over Pasanuri village and establish radio communication with Atredi and Akula. Wait for Akulas confirmation that you may proceed, then join them in attacking remaining targets.

ATREDI4– As the only Georgian aerial assets in the border area your task will be to find and track the Russian advance, relaying position updates for the incoming strike missions. Maintain sufficient distance and low altitude to minimise risks from enemy defences. AKULA flight will assist you as soon as they arrive in the area.