Genesis 14 – Murders in the Rue Morgue 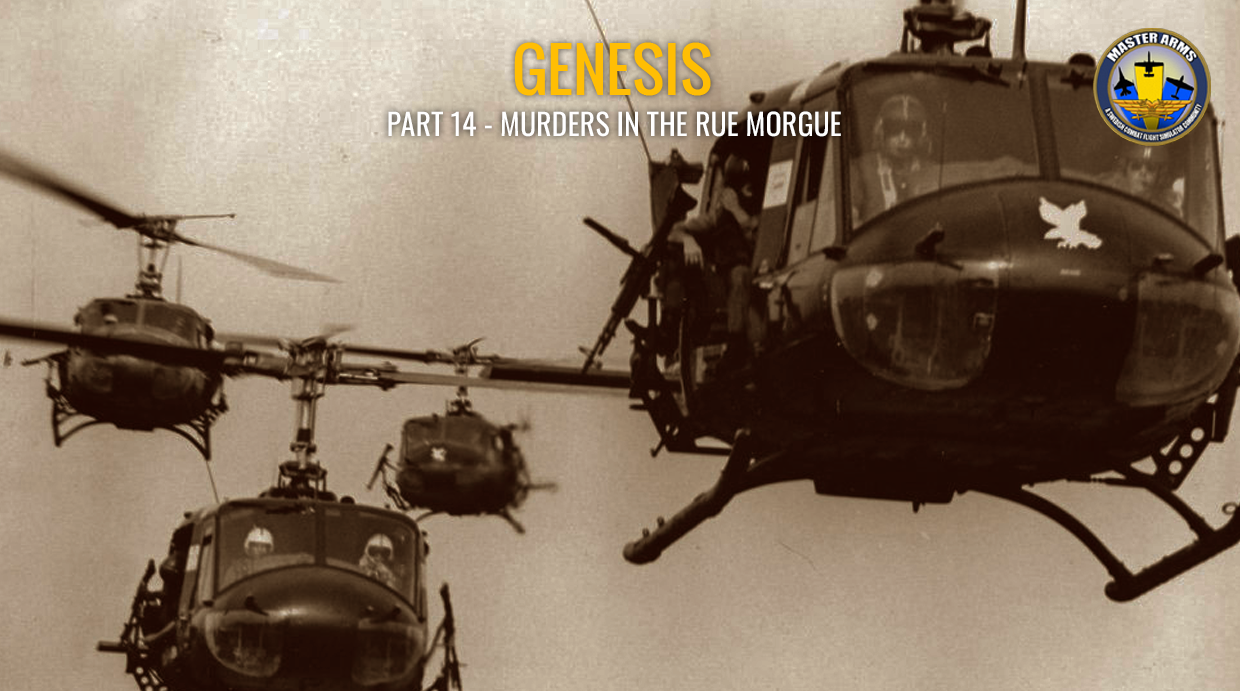 3 weeks ago, Navy and Marine special forces captured the high-value target Abdel Ibrahim, Daesh leader. CIA interrogations have been successful and have resulted in intelligence suggesting another scheduled meeting of Daesh high-ups, this time in the town of Agrabaa.
Over the last few days, undercover CIA operators in Agrabaa have located 8 buildings in the town hosting the majority of the Syrian town’s Daesh forces. Early this morning, they also confirmed the suggested meeting is indeed taking place in the NE parts of the town.
The CIA operation has also provided intel of the location of a large Daesh training camp SE of Agrabaa.

We have decided to launch a raid this morning, storming the buildings where the meetings take place, in order to capture any high value targets of opportunity. Simultaneously, we will launch a strike on the Daesh training camp.
Just before the package takes off, Syrian officials will be notified about the raid, a ceasefire will be offered and Syria will be told to keep their military aircraft at least 40 nm away from the AO. Since Daesh is a common enemy, Syria is expected to accept and honor the terms, but we can’t be certain.

Agrabaa city, mostly made up of 2-4 story buildings. The surrounding ground is mostly flat desert. A large hill to the NW (location of Stalker1).

MiG-21, MiG-25, MIG-29 and Su-24 squadrons at Palmyra confirmed to be on high alert. Intel estimates that the Syrian Air Force will have light routine CAP over Syria and can launch 4-8 fighters in short succession from Palmyra. Additional fighters can reinforce from other bases after a timespan of 20-30 mins from first engagements.

In Agrabaa, heavy small arms fire is to be expected. RPGs are not confirmed but not unlikely.

North of Agrabaa, Ural trucks and occasional BRDM-2s have been spotted.

No civilian air traffic.
Agrabaa is a civilian town. However, every building at least 5 blocks in every direction from target MONKEY is confirmed to be used by Daesh forces, and are considered valid targets. Outside this perimeter, collateral damage must be minimized.

Nitro5 flight of four UH-1H helicopters will enter the town from the W, following the main road (callsign “Rue Morgue”) to perform a quick touch-and-go next to the meeting facilities (Target “Monkey”), dropping off a detachment of Navy SEALs (callsign “Sailor”) to storm the buildings. The SEALs will later be picked up by an allied convoy of Humvees and flatbed trucks (callsign “Detective”).
Just before the helicopters enter the town, Arctic1 flight of four F/A-18C will drop GPS guided bombs on each of the eight Daesh buildings (Targets “Lady1” through “Lady8”).
At the same time the bombs hit Lady targets, Fenris6 flight of four AJS 37 Viggen will hit the Daesh training camp (Target “Razor”).
Two-ship A-10 Hawg8 and four-ship Ka-50 Orca8 will stand by W of Monkey, ready to assist with the help of JTAC Stalker1, located just NE of the town.
A number of CAP flights will be dispatched to the AO to provide cover from any Syrian air threat, though it is unlikely that they will engage given the situation.

The mission contains 1 package, callsign WOLFPACK. All flights are part of package WOLFPACK.

Nitro5 enters the town from the W, right after the bombs go off (ideally at 07:30) and follows the main road (Rue Morgue) east

Nitro5 drops off Navy SEALs (Sailor1 through Sailor3) at “Monkey”

Hawg8 and Orca8, with support from JTAC Stalker1, takes out any targets of opportunity near the town from 07:30 to 08:00, causing a distraction while convoy Detective enters the town to evacuate Sailor.

ROE: B
As per SPINS

NITRO5
* Depart from Kiryat Shmona
* Navigate to Agrabaa and prepare to enter W to E via the main road
* Enter city immediately after GBU impacts (07:30)
* Insert Sailor on the main street at MONKEY
* Extract

As per Aerial Refueling SOP
Remark: Texaco4 and Arco5 not available 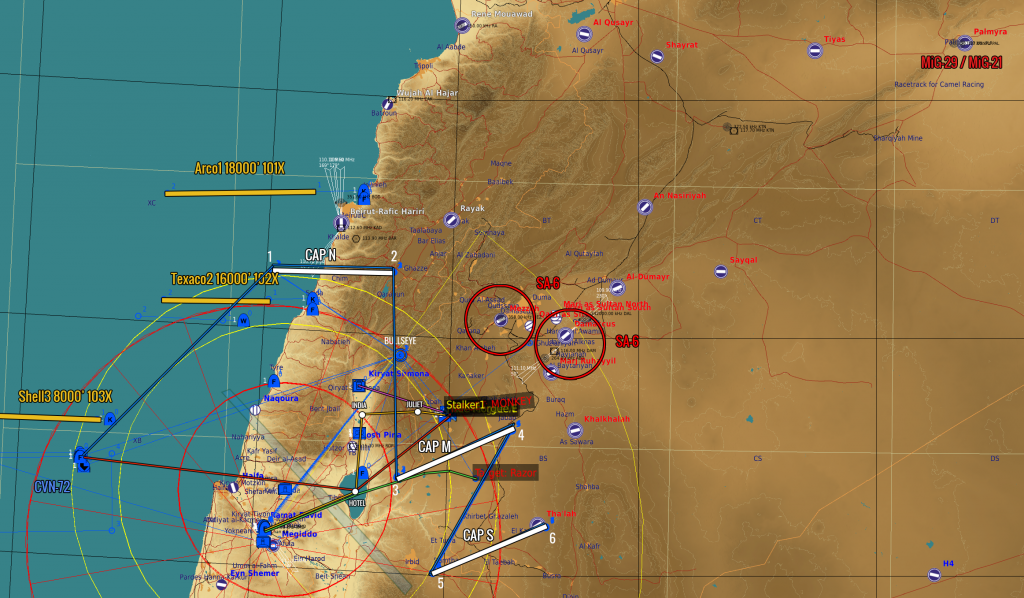 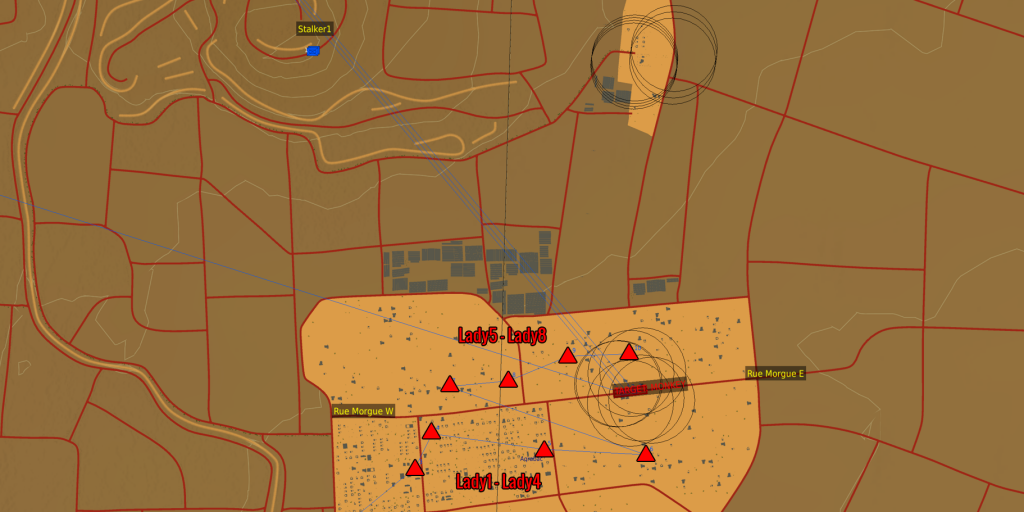 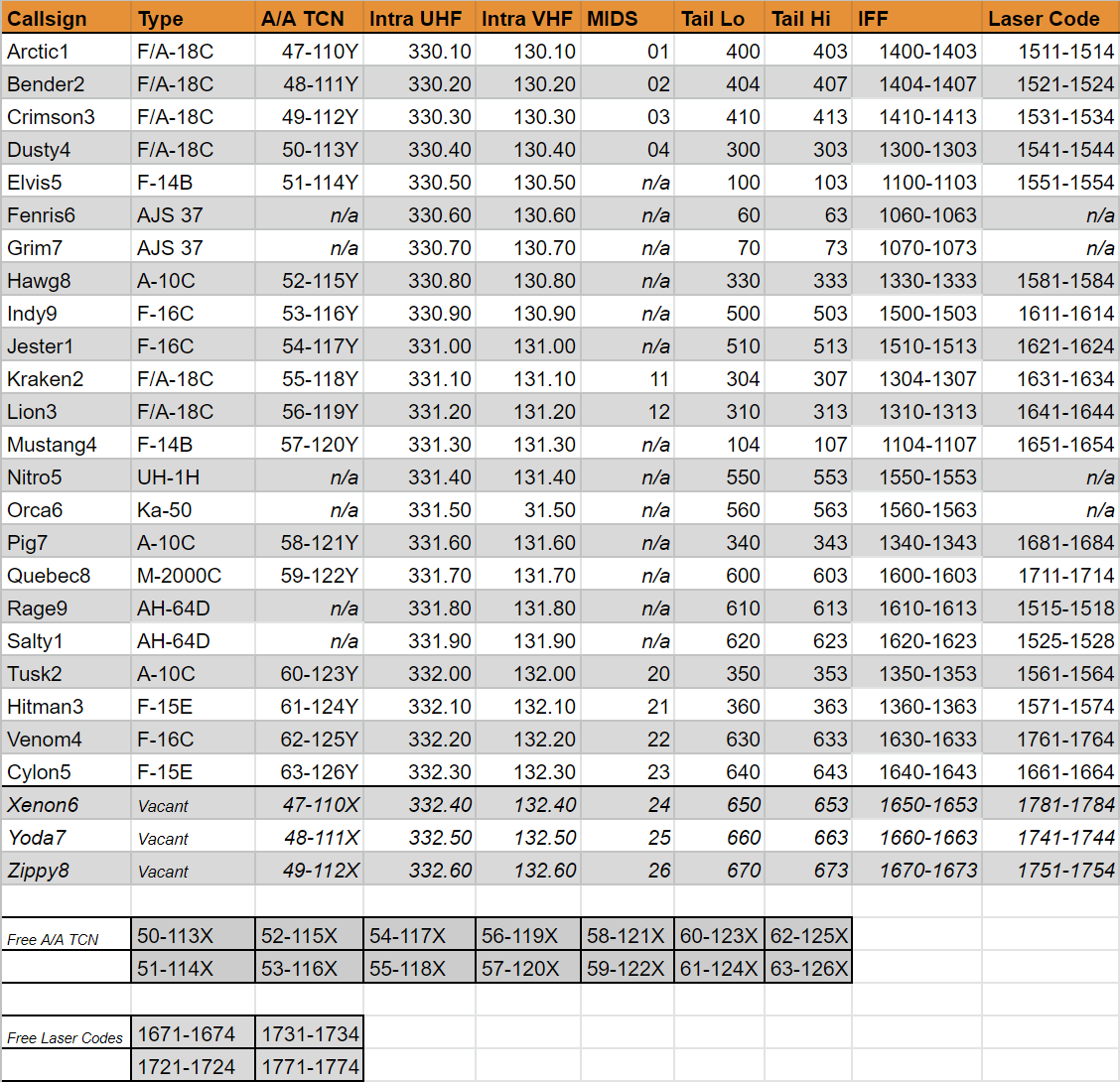