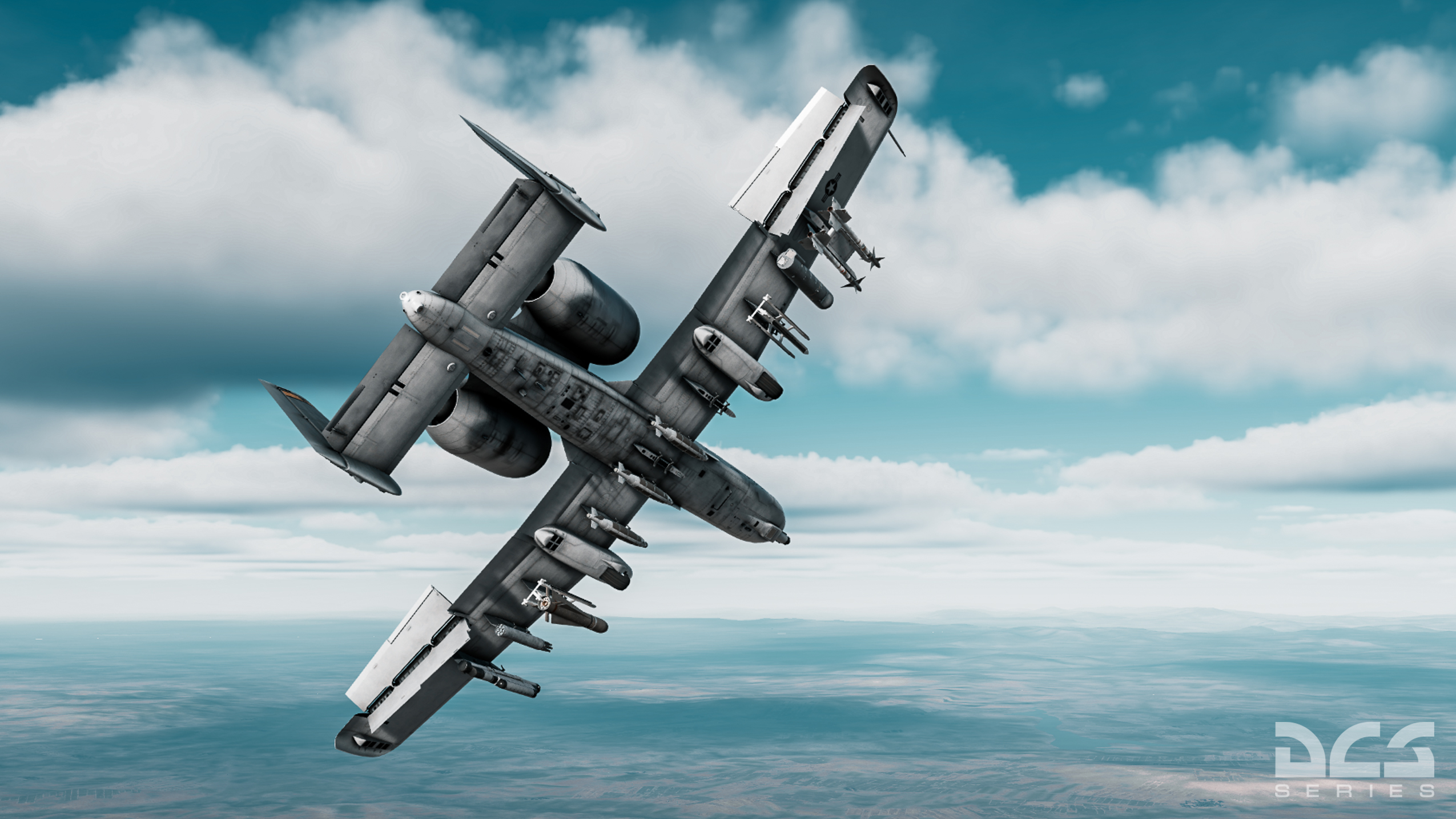 Ones up on a time there where some lost Abrams from the Iraq army. Not anymore.
ISIS in now parading them in full daylight in the only enclave they have left. Now US want them gone and want us to stretch our legs. Buckle up because this is going to be a long strike mission.

More or less the whole of Syria, Jordan, north part of Iraq and Turkey. The ground is a mix of mountains but mostly flat desert for most of the flights.

MiG-21s and occasional MIG-29 have been reported in Syria. Expect main threat from enemy air bases, like Damascus, Tiyas and Al Qusayr. Intel estimates that the Syrian Air Force can have sporadic CAP over central parts of Syria.

Thru out Syria you need to expect plenty of AAA and small SA systems like manpads. The target area around Deir Ez-Zor is heavly defended by by 23 and 66mm as Manpads. There are no reports that ISIS have and large SA-systems.

The US high command want us to destroy the capture ABRAMS, and as we then are in the area recapture At Tanf so we can use the base for future missions. When Israel heard we’re planning an operation they to have a request. They want us to destroy an EWR that’s been placed on a mountaintop close to the northern part of Israel. As a side show they also want us to level the Syrian FOB located nearby. We have been authorized to reduce any SA threat in the area to be able to execute our mission the safest way.

CAP groups to establish security to our other groups. STRIKE groups to destroy the six captured ABRAMS currently parked outside the town of Deir Ec-Zor. SEAD groups to cut a corridor in the Syrian defense for a shorter return home. AH-64 groups to recapture At Tanf. Finally, it’s the A-10s and AJS37s mission to takeout the EWR Syria have placed close to the Israeli border with its nearby FOB.

This operation is divided into three phases which will be conducted chronologically: Establish CAP. Deploy SEAD groups. Deploy STRIKE groups.

ROE: C
As per SPINS
Addition: Weapons free on all main listed targets.

ARCTIC1
Establish CAP and keep our flights safe from any aggression from the Syrian.

* Depart mother at 04:40
* Push towards your CAP area.
* Refuel at ARCO1.
* Report in to STINGRAY and standby for CAP tasking
* RTB on order from STINGRAY

BENDER2
Your mission is to reduce ISIS stock of armor parked at WP5. Reports states it’s a mix of at least 10 MBT, probably T-55 or T-72.

GRIM7
This is a low-level attack assignment as you will need to navigate and keep below the SA-10 at Damascus. Your target is a FOB located close to the EWR station. The target consist of tents, amo/fuel-storage and probably up to 50 troops in training.

HAWG8
* Depart from Ramat David 04:40
* Push to TARGET. (Not the GRIM7 is operating at low-level in the same area)
* Destroy EWR target. Report DIRTPILE when target destroyed.
* RTB

INDY9
Establish CAP and keep our flights safe from any aggression from the Syrian.

* Depart Incirlik at 04:40
* Push towards your CAP area.
* Refuel at SHELL.
* Report in to STINGRAY and standby for CAP tasking
* RTB on order from STINGRAY

JESTER1
Your mission is to destroy the six ABRAMS parked at WP5.

RAGE9
Your target is the FOB at At Tanf. All 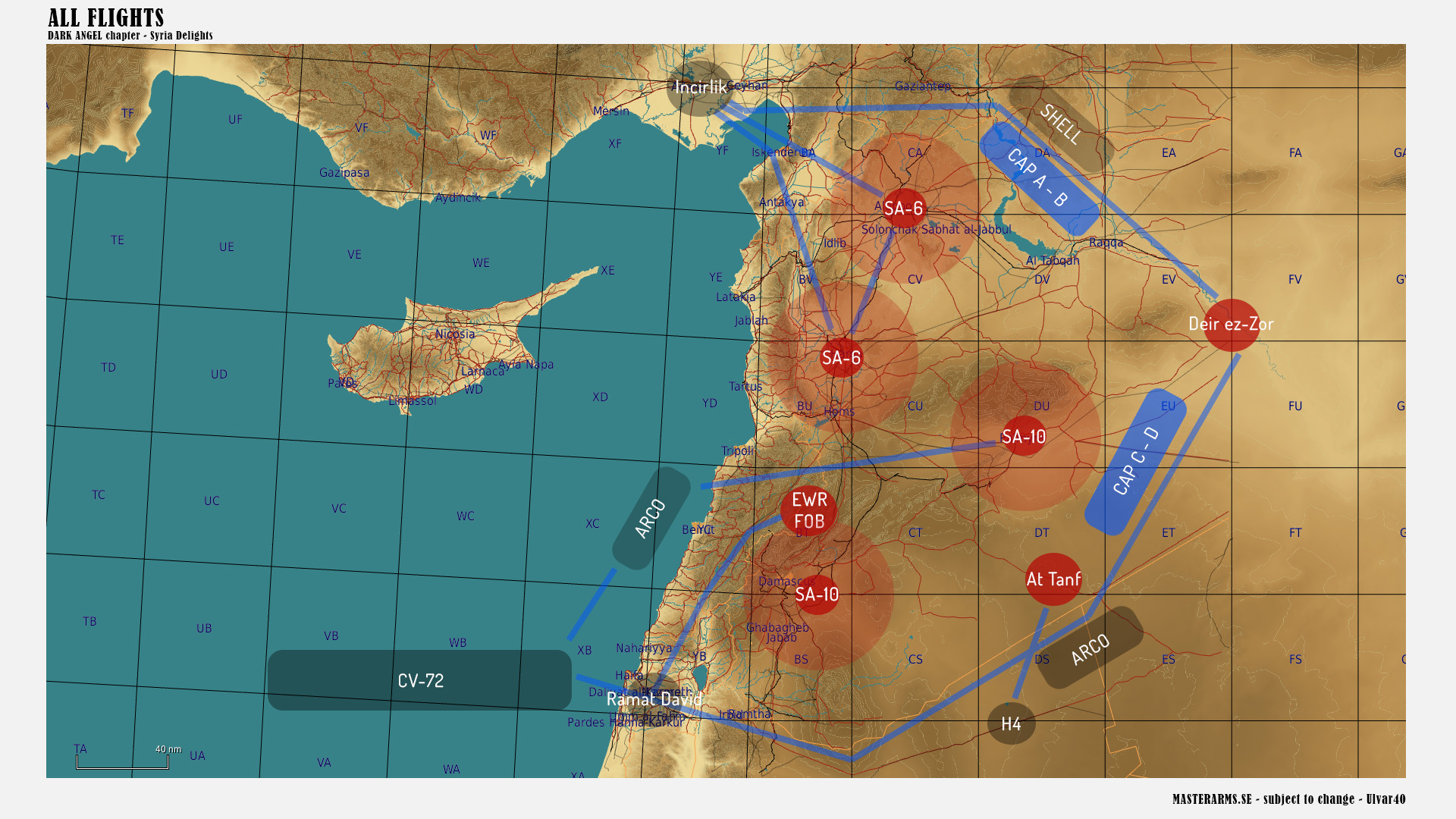